A+ A-
Print Email
Online registration for the Common Admission Test (CAT) of Cochin University for Science and Technology (CUSAT) for 2014-15 admission will commence at www.cusat.nic.in on 20th January, 2014. 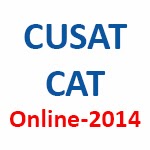 Admissions to the various courses at CUSAT are based on CAT/Departmental Admission Test (DAT)/Test for Lateral Entry (LET) and C-MAT/MAT/CAT score for MBA.


MA Applied Economics and Dual Degree Programmes in MIP.Ph.D and LL.M(IPR)Ph.D will be held on 27th April, 2014 (Sunday).

The dates for admissions related to M Tech, MPhil, Ph.D and Diploma Programmes will be announce later by the Departments concerned. Only online registration will be considered for admissions to academic programmes of CUSAT except for MPhil courses, Ph.D Programmes, MA Translation in German/Russian and Diploma/Certificate Programmes.


Admission details, eligibility conditions and other particulars will be available in the detailed Notification to be published at www.cusat.nic.in and www.cusat.ac.in


Facility for On-line registration for CAT, LET and PG Programmes including M.Tech and MBA Programmes (C-MAT/MAT/CAT of IIM score required for MBA) will be available from 20th January to 20th February 2014. Online Registration for International students can be done between 20th January, 2014 and 21st April, 2014.


Remittance of fee at Bank using Chalan or through net banking can be done between 20th January and 25th February, 2014.


Facility for On-line registration for M.Tech and MBA Programmes (C-MAT/MAT/CAT of IIM score for MBA, GATE score for M.Tech.) will be available between 15th March and 21st April 2014 also. Issue and Receipt of Application for DAT from Departments/Schools concerned will be undertaken between 20th January and 25th February, 2014.